Ahead of Sunday’s performance at the Watford Colosseum, the star credited as the new first lady of the West End and new mum, Kerry Ellis, has managed to find time in her busy schedule for a catch up.

“I think coffee has come back into my life quite a lot,” she says with a laugh as she lists her packed diary, with three tours and a new album already scheduled for the year, fitted in neatly around caring for her newborn son, and of course this weekend’s concert. “But it is good, I am very fortunate.”

The extravagant evening of musical melodies, West End Anthems, features music from a variety of shows performed alongside Oliver Tompsett, Alasdair Harvey and Helen Hobson. “It is big hits from the musicals, but done in a more contemporary way,” Kerry says. “It is not your traditional concert, it is a bit more interactive.”

They first performed the show together in Bluewater, as part of the summer’s Glow festival, but will reunite for another one-off performance. “It is songs that we are associated and familiar with. I do stuff from Wicked and We Will Rock You, Alasdair does some things from Les Miserables, Oliver from Rock of Ages,” she adds. “It is nice to come together and sing our highlights, it is great fun.”

This production may be her first time working with Alasdair, but one co-star is no stranger. “Oli and I get on brilliantly,” she gushes, talking of their time in Wicked together. “We do get to see each other occasionally, but he is a new parent as well so it is great to come together for a night and be able to sing some of those songs again.”

A concert of musical numbers would not be complete without the iconic I Dreamed a Dream, and Kerry credits her duet with Helen as her favourite song from the show. “We have both sung it a million times on our own but to sing it as a duet is really nice,” she says. “It is great to get to work with her, she is a real professional and wonderful to watch.” 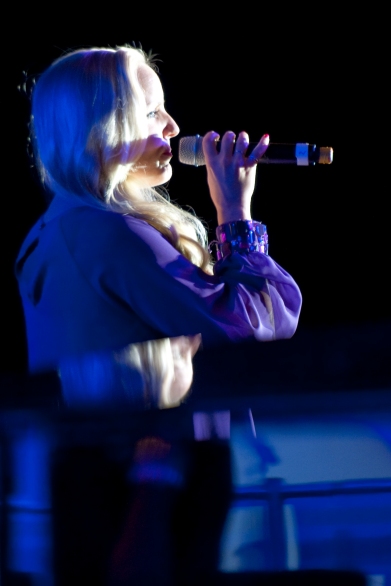 Despite working with Queen guitarist Brian May, Barry Manilow and Don Black, singing with Helen appears to have drawn her away from male musicians slightly, however, as her dream duet would be with a female icon. “Barbra Streisand or Elaine Paige would be great,” she says. “Or someone like Celine Dion. She’s brilliant, I saw her in Vegas and she was absolutely mind-blowing.”

Her greatest achievement seems impossible to choose, with the highlights of her extensive career eventually narrowed down to performing on Broadway, releasing an album, singing in Hyde Park and taking part in the Festival of Remembrance. Her biggest fear is not so elusive, however. “Losing my voice,” she says. “My voice is my livelihood and my life really and if I lost that I don’t know what I would do.”

Her future projects include a tour of Rent in February, followed by a tour of her acoustic concerts Born Free with Brian May. She is also working on an album through the website Pledge Music and has a tour planned for October.

You can see Kerry, Oliver, Alasdair and Helen in West End Anthems at the Watford Colosseum on Sunday 12th January at 7.30pm. Tickets are £25-27 and available online.